Having ran across the South Downs a few times I knew this would be a tough tough marathon. Waking up on the Saturday morning I could hear the wind rattling and knew we were in for an interesting day. Fortunately the sun was out and so it was clear it would be warming up and no sign of rain. 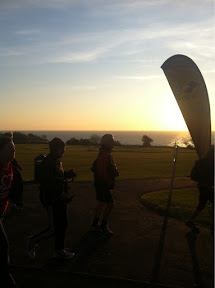 I collected my race number and set about planning how I was going to attack the race. Beachy Head marathon is a grueling off road marathon with a total ascent of 3500ft. The race starts on Dukes Drive and climbs 300ft straight up the first hill. Only the elite run the whole thing. My plan was to run half of it. When the gun went I was ready and half way up the hill I went. The inevitable time came to walk and I was not alone. I had read in the morning that the first 15minutes of a run are a shock to the system and after that the body adapts. With this race every 15minute increment had something to shock the system.

The beauty of the race was that for every hellish challenge there was a delight. The first of these was the single bagpipe player standing atop the downs and playing for all the runners. Following from this we ran through the downs golf course. This was a steady incline for a couple of miles. Needless to say I was delighted to see the downhill so elbows out and I chucked myself down the hill and what a feeling. Many people had chosen to wear road shoes, but this was where the trail shoes came into their own. The lose gravel was no match for my Inov-8's. The joy was short lived though when we reached the bottom of the hill to see we would be charging up another hill. 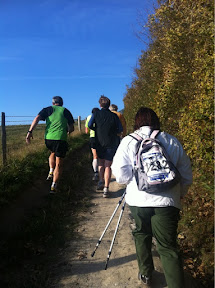 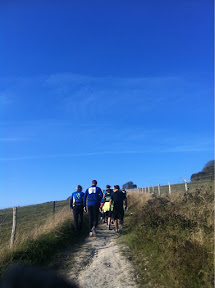 It was a beautiful day but the hills were properly leg sapping. It was vastly becoming apparent that the race organizers were not joking when they said to add 45min to race times for this run. We would later find out that the wind meant we should add an hour.

When I reached the top of this hill I ran round the corner and pelted down a hill overtaking the people who clearly preferred the uphills. It is now evident that what goes up must come down and go back up again 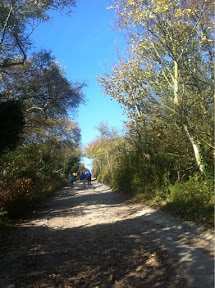 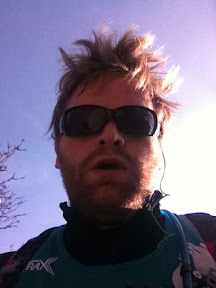 Ploughing on the weather remained good and the spirits high. We ran off road and out through the villages. The checkpoints were fabulous and it was so lovely to not have the chaos of traffic fumes and mile markers. Only having markers about every 4miles made it far easier to manage. The mars bars and bananas at checkpoints made it even better.

I was not use to these areas of Sussex and the hills were tough. The toughest challenge appeared at Alfriston with a 227step climb. 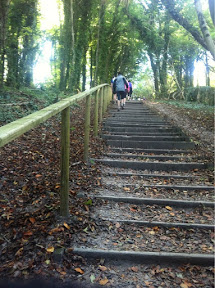 It may be a cliche but the photo does not do these steps justice. By the top of the steps I knackered and my legs were burning. It was time to dig deep and plough on through. The hills kept coming and each and everyone looked to try and break the runners. When I got to the next water station it was lovely to see a long down hill to the cuckmere bridge. There was some trepidation as this meant Seven Sisters was approaching. Veteran runners were quick to note this was called the beast. Runners were also talking about how the hills are a lot tougher running back towards Eastbourne. I put this to the back of my mind and arrived at Cuckmere to the greeting of my lovely wife and a bottle of lucozade. At this point I wanted to hit the marshall who directed me left. I should point out that left is 500ft climb to the top of the downs and right is nice flat gravel path. So up up up I went and eventually reaching the top to only see that the layout saw us running pack down on to the path that the right fork in the road would have had me running on. So elbows out and off I sprinted. I was determined to make up time knowing that there were going to be many places I was going to have to walk before the end.

Reaching the bottom of the hill saw me practically running straight back up. By the time I reached the top I could see the seven sisters and the battle had officially begun 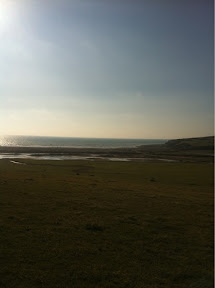 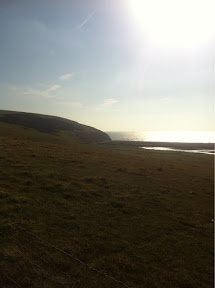 The run along the seven sisters was a series of sprints and scrambles all the way to Birling Gap, where the fabulous people had cups of tea and mars bars waiting. Off I trudge on my steady 2mile climb up the hills with my fellow competitors. A conversation started in which I was informed that anything under 6hours today would be seen as a good time. I wanted to note that I didn't like this attitude as everyone who finished was a champion, but I didn't as all that ground into my head was "I have to finish in under 6hours" so I carried on. The wind was constantly in my face and this was the toughest element. I had expected hills and pain, but in the weeks building up a tail wind for the final few miles had been promised and instead what we got were 20mph head winds.

Eventually I got to the crest of the final hill, fittingly by a pub and made the descent towards the finish line. This is a looped course and so the finish was the 300ft steep drop and then a 50mtr sprint. In my training I had decided to walk this hill, but all day I had been flying down the hills and so I decided on this plan. The hills arrived and down it I went leaping down the few steps in the middle of the hill. At this point I could see Zoe worrying and my niece and nephew with posters one saying "run run uncle dan" and the other saying "run fatboy run" both very fitting and so with just 50mtrs to go I sprinted all out across the line. I had done it an in 5hrs 46min and damn will I be back next year. This race is not about times, but next year I will be under 5hrs.

The organisation of this race was brilliant including the 7 for goodness shakes I was given at the end. I attribute my zero aches to these.

It was great to run in an area that ST Wilfrids serve and a place that was so precious to Zoe's grandad.

I now only have the Brecon Beacon 45mile race to go and I am so looking forward to it. We need to raise as much money as possible. Please sponsor me and spread the word to everyone you know. Www.justgiving.com/danpark