Sorry for the delay in updating my blogs. Things have been a bit hectic. Anyway if you are reading this then you will be able to know that I survived the Loch ness marathon.

It was a great weekend that I got to enjoy with Sam Robson and Peter Lefort. Sam is well versed in long distance running and Peter was setting out on his first marathon. This would be my second event in the challenge I have set.

The task began with a 8.5hour drive to Scotland. Sam and I split the driving and manage to push on through only needing to switch once. The weather was not brilliant in Scotland. we crossed the border and the rain and the cold soon followed.

We arrived at our B&B and were delighted with the standard of the room and the welcome we received. After relaxing we went down to the start and registered for the race. It struck me that if it continued to rain this race could be a real challenge. We ate plenty of pasta on the day, both for lunch and dinner.

In our rock and roll lifestyle Sam, Peter and myself were all in bed early and ready for the following day to arrive. It was an early start in the morning as we needed to leave the B&B by 7am and get to the finish area. Due to the marathon being a point to point race there were buses taking people to the start. This journey was about an hour and not fun.

Arriving at the marathon start line it was cold and it was raining. No beautiful sights could be seen and Scotland could not be taken in for the beauty it usually displays.

We all moved closer towards the line and in spite of the rain the atmosphere was buzzing. Eventually everyone was released to run and the fun began.

Peter and I ran the first mile together and then informally split on our own journeys. For me the run started really well. I am not sure if this is because it was downhill for most of the start. I had set myself a goal of running the first quarter and then interspersing running with walking. As things happened I felt really good and it was not until 13.5miles that I began adding walking into the plan.

Running is a funny sport and everyone responds so differently to the challenge. Equally what works on one day may not work on another. Fortunately it seemed for me that on this day everything was working. Its moments like this that are the reason I run. The feeling of floating along the road cannot be beaten. Of course that feeling can disappear very quickly as well as it did at 17.5miles

For those who have not run the Loch Ness Marathon at 17.5miles you basically start ascending until mile 24. It's particularly unpleasant and breaks all bar the elite. Yes even Sam Robson. The key here was to keep attacking but not be phased by walking. I was surprised how this attitude meant there was minimal impact on my time. I should also point out that the sun was out and it had become a beautiful day for a run.

Slowly and carefully the distance was reducing and the finishing was appearing. As I approached the final 800mtrs I took a glance at my watch and realised that I was on for a massive PB. This felt unimaginable 8miles back. The legs were now tired and I was exhausted, but with some encouragement from another runner I mustered together my final energy and away I went. Full on sprint for the final 200mtrs. I felt like I was flying and when I heard the commentator shout "here comes Dan Park and thats the way to finish a marathon" I knew I couldn't slow down. I dipped for the line and looked at my watch to realise I had run 4hr35min a huge 20min quicker than my previous effort.

All runners agreed this was a tough marathon but amazing fun. 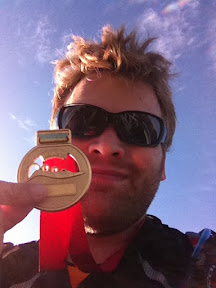 It's important to remember this is part of an overall challenge of 5runs. This was the second marathon leaving a marathon a 1/2marathon and an ultra to go. Oh is that all :) www.justgiving.com